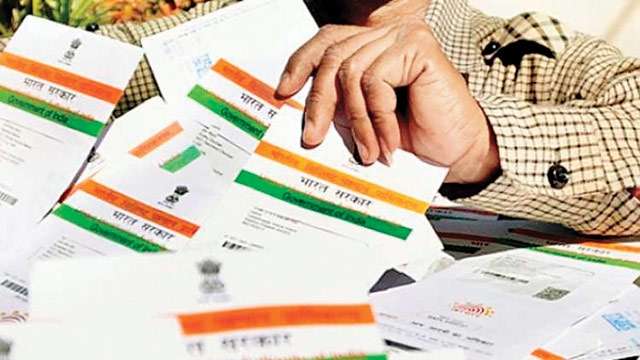 New Delhi, Sep 26 (PTI) The Supreme Court Wednesday declared the Centre’s flagship Aadhaar scheme as constitutionally valid but struck down some of its provisions including its linking with bank accounts, mobile phones and school admissions.

A five-judge constitution bench headed by Chief Justice Dipak Misra held that while Aadhaar would remain mandatory for filing of IT returns and allotment of Permanent Account Number (PAN), it would not be mandatory to link Aadhaar to bank accounts and telecom service providers cannot seek its linking for mobile connections.

The bench also struck down the national security exception under the Aadhaar (Targeted Delivery of Financial and other Subsidies, Benefits and Services) Act.

It said Aadhaar is meant to help the benefits reach the marginalised sections of society and takes into account the dignity of people not only from personal but also community point of view.

The top court said Aadhaar is serving much bigger public interest. Aadhaar means unique and it is better to be unique than being best.

There are three sets of judgements being pronounced. The first of the three verdicts was pronounced by Justice A K Sikri who wrote the judgement for himself, CJI and Justice A M Khanwilkar.

Justice Chandrachud and Justice A Bhushan, who are part of the bench, have written their individual opinions.

It directed the government not to give Aadhaar to illegal immigrants.

The apex court upheld passing of Aadhaar Bill as Money Bill by the Lok Sabha. The Congress party and its leader Jairam Ramesh had challenged the passage of the bill in the House.

It said there is nothing in the Aadhaar Act that violates right to privacy of an individual.

Justice Sikri said robust data protection regime has to be brought in place as early as possible.

He said the attack on Aadhaar by petitioners was based on violation of rights under the Constitution, which they felt will lead to a surveillance State.

Observing that there has been minimal demographic and biometric data collected by UIDAI for Aadhaar enrolment, Justice Sikri said unique identification proof also empowered and gave identity to marginalised sections of society.

There is no possibility of obtaining a duplicate Aadhaar card, he said, adding there is sufficient defence mechanism for authentication in Aadhaar scheme.

The concept of human dignity has been enlarged in the judgement, he said.

The verdict was pronounced on a batch of pleas challenging the constitutional validity of Aadhaar scheme and its enabling 2016 law.

The bench had on May 10 reserved the verdict on the matter after a marathon hearing that went on for 38 days, spanning four-and-half months.