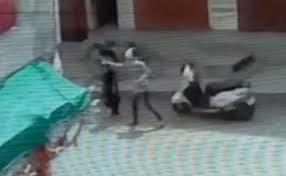 Indore (MP), Sep 19 (PTI) A 21-year-old dancer was attacked here with a chemical allegedly by her boyfriend who was against her frequent outstation visits for dance shows and meeting other men, police said Wednesday.

The woman complained of blurred vision after the attack and was taken to a hospital, Additional Superintendent of Police Prashant Choubey said, adding that there were no burn injuries on her face.

The accused identified as Mahendra Sen alias Monu (23), who runs a hair salon, was arrested, he said.

The victim, who is the member of a renowned folk dance group, told the police that the man called her to Banganga area Tuesday and when she reached there, he threw some liquid chemical on her face, Choubey said.

The accused was wearing a mask at that time, he said, adding that the woman in her statement to the police identified him as Sen.

The incident was also captured in a CCTV camera installed in the area.

After the chemical attack, the woman complained of blurred vision and was admitted to a private hospital, where she was kept under observation for 24 hours, Choubey said.

‘The chemical thrown by Sen on the woman’s face is suspected to be a toilet cleaner. The attack was not fatal as there was no sign of burn injury or blisters on the victim’s face,’ he said.

Samples of the chemical used in the attack will be sent to a laboratory for examination to find out what exactly it is, he said.

Asked about the reason behind the attack, the police official said Sen was pressurising the woman for marriage since a long time.

He was apparently annoyed with her frequentt rips out of the ctiy in connection with her dance performances and her interaction with other men, Choubey said.

The accused was booked under IPC Section 326 (A) (causing grievous hurt by use of acid) and other relevant provisions, he said, adding that a probe into the matter was underway.