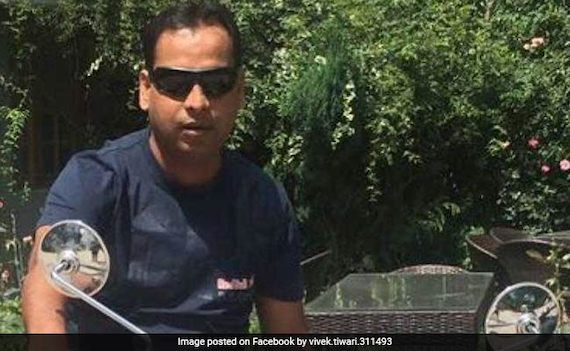 Lucknow: A 38-year-old man was shot dead early Saturday morning by a policeman when he allegedly refused to stop his car for checking in Lucknow’s posh Gomti Nagar neighbourhood, police said.

Two constables were arrested on the basis of an FIR lodged by Apple executive Vivek Tiwari’s colleague Sana Khan, who was travelling with him .

Hours after the 1.30 a.m. shooting, Uttar Pradesh Director General of Police O P Singh called it a criminal act and said the two constables will dismissed from service.

Senior Superintendent of Police (SSP) Kalanidhi Naithani said the policemen on patrol duty had asked Tiwari to stop the SUV, which had hit their motorcycle and injured them.

Constable Prashant Chaudhary noticed “suspicious activity” and opened fire when the man allegedly tried to speed away. A bullet pierced the windscreen as the car rammed into a pillar, police said.

The SSP had said the actual cause of death, whether it was bullet injuries or injuries suffered by the Tiwari when the car hit the pillar, will be known only after a post-mortem.

The autopsy report later confirmed the death was caused by gunshot injuries.

The constable, however, said he opened fire in self-defence when Tiwari tried to run over him, according to police.

A special investigation team has been formed to investigate the shooting. A magisterial inquiry has also been ordered, officials said.

Yogi Adityanath said, This was not an encounter.

The guilty will not be spared and if needed a CBI inquiry will be held, he told reporters in Gorakhpur.

Additional Director General of Police (law and order) Anand Kumar said the incident was unfortunate. “Prima facie it is a murder case, he added.

The principle of law is clear that the right of self-defence cannot exceed the perceived threat,” the ADG said.

He said adequate security has been provided for Sana Khan, on whose statement the FIR was based.

Tiwari is survived by his wife and two children