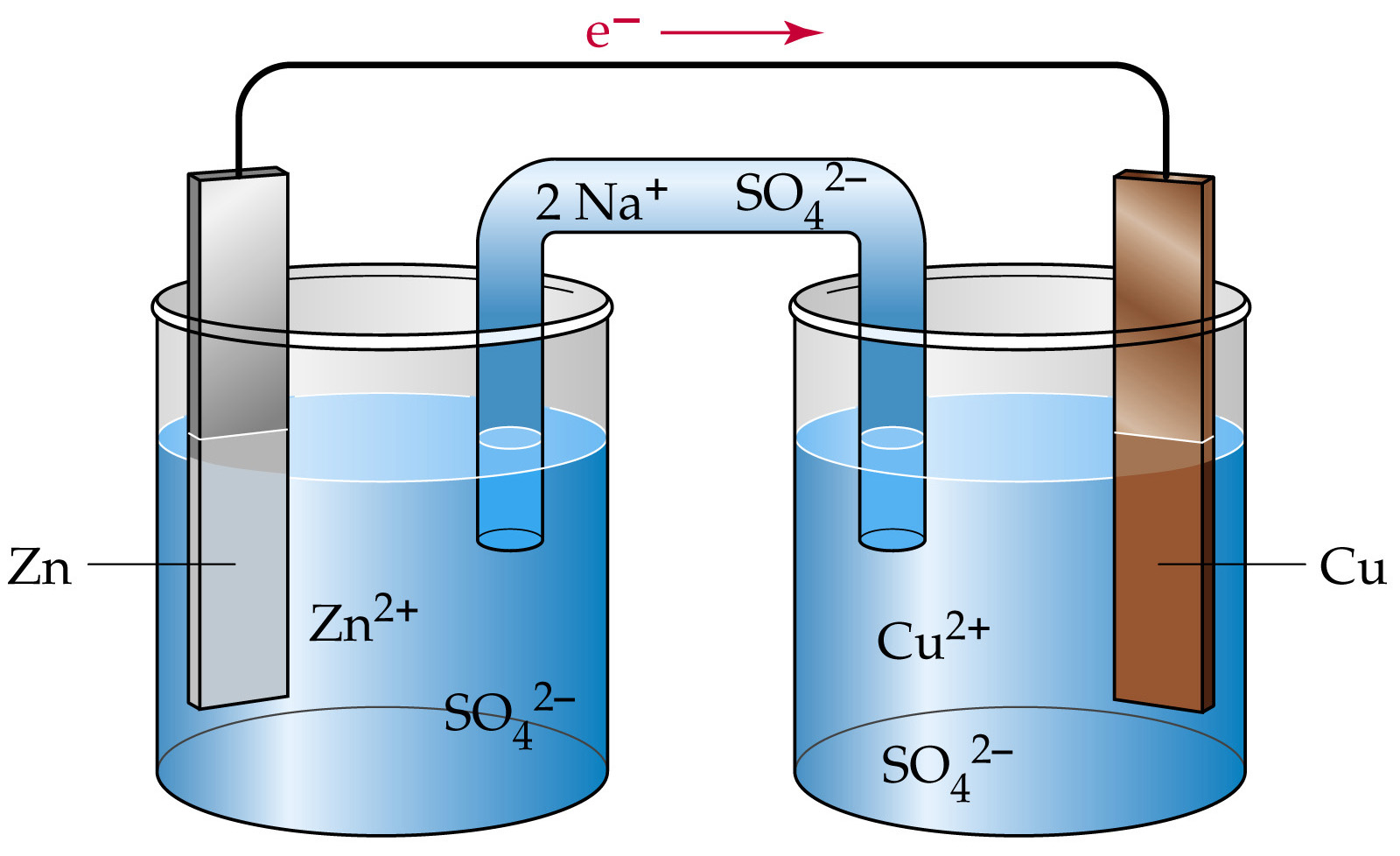 Primary cell
A primary cell is a battery that is made to be used one time only. Primary cells are often used to give power to small appliances that are used in the home. They have the advantage of convenience and cost less per battery, with the down side of costing more over the long term. Generally, primary batteries have a higher capacity and initial voltage than rechargeable batteries, and a sloping discharge curve.

A Leclanche battery or Leclanche cell is a primary cell .It was invented by the French engineer George Leclanché around 1866. It has much lower power than the alkaline battery, but it is cheaper to make.. It works by the oxidation of zinc by manganese dioxide. It has a zinc chloride or ammonium chloride electrolyte.

A lithium battery is a long-life, lightweight, high-power battery used in watches. It is normally in the shape of a coin. As the name suggests, the battery has lithium in it. The lithium is oxidized, providing the power for the battery. They are not rechargeable; once they are dead they should be thrown out. A lithium battery is different from a lithium-ion battery. They are rechargeable and are used in phones, portable computers, and other items like that.

A mercury battery is a primary cell. It has similar performance to, but is much cheaper than, silver oxide batteries. Its disadvantage is that it contains toxic mercury, which pollutes the environment. This battery uses the oxidation of zinc by mercury. Oxide to generate electricity. It has either sodium hydroxide or potassium hydroxide as the electrolyte. Mercury batteries used to be common but have become increasingly restricted. And advantages of mercury batteries are their very long life and steady voltage.
Silver oxide batteries

Silver oxide batteries are primary cells. They are generally found in small sizes. They are expensive because they contain silver, but do not have toxic mercury like the cheaper mercury battery. They generate electricity by oxidation of zinc with silver oxide. It has a basic electrolyte, usually potassium hydroxide or sodium hydroxide.

Merit and demerit of
disposable battery

It costs less, easier to make, easily available to buy. Demerit of disposable battery is making waste when thrown away and can be made with toxic materials.

Galvanic cells are named for the Italian physicist and physician Luigi Galvani. who observed that dissected frog leg muscles twitched when a small electric shock was applied, demonstrating the electrical nature of nerve impulses. Once he touched one of frog legs with two tools made from different metals, it moved even though the frog had been killed before the dissection. Volta also found that he could make a little electricity just by making two different metals touch each other. He thought that the two different metals gave something he called contact tension, and the electricity came from that contact tension. Galvani and Volta talked a lot about this, but they never agreed.

Battery charger
A battery charger is a device that makes a used battery able to be used again. It works by forcing electric current into it from the opposite polarity of the battery. However, only rechargeable batteries can be recharged with a battery charger.

Nickel cadmium
A nickel cadmium battery is a secondary cell. It is also known as Ni-Cd. It was used for many applications, such as rechargeable phones, flashlights, and other things. Nickel cadmium batteries contain toxic cadmium metal in them. It works by the oxidation of cadmium .Potassium hydroxide is used as an electrolyte.

Electrolyte
An electrolyte is a chemical that conducts electrical current. It is used in batteries to make the ions flow, producing current. Electrolytes ionize when dissolved in suitable solvents such as water. Most soluble salts, acids, and bases are electrolytes.

Cathode and anode
A cathode is a type of electrode through which electrons move. The anode and cathode are defined by the flow of current. In the general sense, current refers to any movement of electrical charge. The cathode type of electrode delivers electrons   negative charge and the anode collects electrons have the positive charge. In other words, a cathode is a positive electrode on a battery and a negative electrode on an electrolytic cell. Electric current is perceived as flowing in the opposite direction that the electrons are flowing.

Battery is a regular waste

Batteries contain a number of metals including cadmium, lead, manganese, zinc, lithium and nickel these metals are very harmful to the environment – most are toxic. with the potential to pollute rivers, lakes and contaminate water supplies. For this reason, many countries have rules that say that a given percentage of all batteries must be re-cycled. Many batteries are thrown away in regular waste after they have been used. Battery recycling is a name of the process of separately collecting such batteries so that they can be disposed of properly.

A battery converts chemical energy into electrical energy by a chemical reaction. Usually the chemicals are kept inside the battery. It is used in a circuit to power other components. A battery is usually composed of a series of cells that produce electricity. Each cell has three essential components: the anode, the cathode, and the electrolyte. 1936 in Iraq the relics found in that tomb were about 2000 years old. Among these relics, there were some clay jars or vessels which were sealed at the top with pitch. These clay jars are suspected to be 2000 year old battery cells. The first battery was developed by Alessandro Volta in the year of 1800. Nowadays, his battery is called the voltaic pile. The main problem with the Voltaic pile was that, it could not deliver current for a long time.
This problem was solved by a British inventor John F. Daniell In the year 1836, John Frederic Daniell, a British chemist developed the Daniell cell as an improved version of the voltaic cell. From that time until today, the battery has been the most popular source of electricity in many daily life

applications. A battery produces direct current (DC) electricity. Using the electricity from an outlet in a house or building is cheaper and uses less energy. A Battery can be one cell or many cells. Each cell has an anode, cathode and electrolyte.
In 1839, the fuel cell was designed by Sir William Robert Grove. He mixed hydrogen and oxygen within an electrolyte solution, and created electricity and water. And  in  1842  Robert W. Bunsen, German chemist  developed  Bunsen cell  it is a zinc-carbon primary cell composed of a zinc anode in dilute sulfuric acid separated by a porous pot from a carbon cathode in nitric or chromic acid. In the year of 1859, Gaston Plante, first developed the lead acid battery cell. This was the first form of rechargeable secondary battery. In 1866, the battery was again developed by a French engineer, Georges Leclanche.It was a carbon-zinc wet cell battery known as the Leclanche cell.In 1901, Thomas Alva Edison discovered the alkaline accumulator.