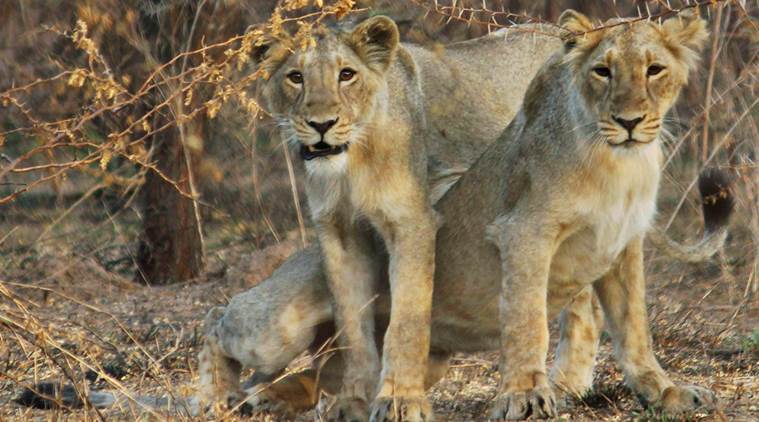 A huge increase of lion population in the protected Gir National Park and Wildlife Sanctuary and surrounding areas was declared by Chief Minister Anandiben Patel, on Sunday, in Junagadh. The CM declared the number of the endangered animal as 523; 27 per cent increase comparing the last census in 2010 when the Lion population was estimated to be 411. Express Photo Javed Raja. 10.05.2015.

It is suspected that 12 lions may have been killed in total; authorities are yet to confirm if another body, found in a severely decomposed state, is that of a lion.
A carcass of a lioness was found in a forest near Rajula of Amreli ditsrict Wednesday, while three more lions were found dead the same day in Dalkhaniya range area in the Gir forest, a senior official said.
Carcasses of seven other lions were found in were found in Roniya area. The 11 bodies include three adult females, two adult males and six cubs.

Viscera samples of the dead animals were collected and sent to the Junagadh Veterinary Hospital. Officials say that the postmortem report said that nine lions died due to lung infection (Feline Leukemia) and three due to infighting. Additional Chief Secretary, Forest and Environment, Rajiv Kumar Gupta said the government has ordered a probe and it will be conducted by the principal chief conservator of forest (wildlife). Prior to the postmortem, the preliminary investigation suggest that eight deaths were caused due to infighting.

Principal Conservator of Forest and Wildlife AK Saxena has denied any angle of foul play into the matter. He said that most of the deaths are due to infighting and injuries caused thereby, mainly affecting cubs and females. Thist rend is being noticed over a period of three to four years

The Asiatic lion is an endangered species and Gujarat’s Gir Forest National Park is one of their last remaining habitats. As per the 2015 census, Gir is home to 523 lions.

Rajya Sabha MP Parimal Nathwani said on Thursday that a probe must be conducted to see if the deaths occurred due to eletcrocution, poisoning or poaching.