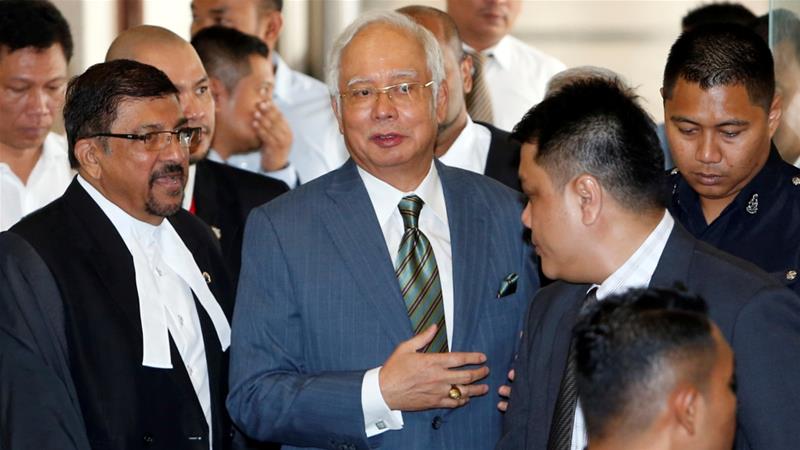 Kuala Lumpur: Malaysia’s ex-leader Najib Razak arrived in court Thursday to face a barrage of charges relating to USD 681 million of state funds that allegedly ended up in his personal bank account. Najib, who suffered a shock election defeat in May, was arrested Wednesday by officials probing claims the former prime minister and his cronies looted billions of dollars from state fund 1MDB in an audacious fraud. Police say he will face 21 money-laundering charges related to the mysterioust ransfer of huge sums into his personal bank account, a key episode in the long-running scandal. He may also face additional charges under anti-corruption laws.He has already been arrested twice and hit with several counts related to 1MDB since losing power, but observers say the latest charges represent a major step forward in efforts to bring him to justice.

Allegations Najib and his cronies pilfered huge sums from the investment vehicle and spent them on everything from high-end real estate to artwork were a major factor in the defeat of his long-ruling coalition to a reformist alliance headed by Mahathir Mohamad.

Mahathir, 93, who is in his second stint as premier after coming out of retirement to take on scandal-mired Najib, has ramped up probes in the 1MDB scandal and vowed to have the ex-leader prosecuted. The 64-year-old was initially detained Wednesday by the Malaysian Anti-Corruption Commission over the alleged bankt ransfers, before facing further questioning by police Thursday morning.

The police statement did not mention 1MDB. However the US Department of Justice, which is seeking to recover assets allegedly bought with stolen 1MDB money, claims that USD 681 million from the fund was funnelled to Najib’s accounts.Najib has already been charged with money-laundering, criminal breach oft rust and abusing his position over claims he pocketed some USD 10 million from a former unit of 1MDB. He denies any wrongdoingBut the latest charges are more significant and relate to a key episode in the 1MDB scandal.

When reports surfaced in 2015 that huge sums from 1MDB flowed into Najib’s bank accounts before a hotly contested election, it dramatically ratcheted up pressure on the leader and his inner circle over the scandal.The attorney-general later cleared Najib of any wrongdoing, saying the money was a personal donation from the Saudi royal family, and closed down domestic investigations.

1Malaysia Development Berhad was set up in 2009 and overseen by Najib, with the purported aim of promoting economic development in Malaysia, but accusations quickly mounted the fund was a vehicle for the leader and his cronies to loot state coffers.

Najib and his luxury-loving wife Rosmah Mansor became hated figures,s ymbols of the rot in a corrupt elite that had ruled Malaysia uninterrupted since independence from Britain in 1957.

The DoJ estimates that USD 4.5 billion in total was looted from the fund.