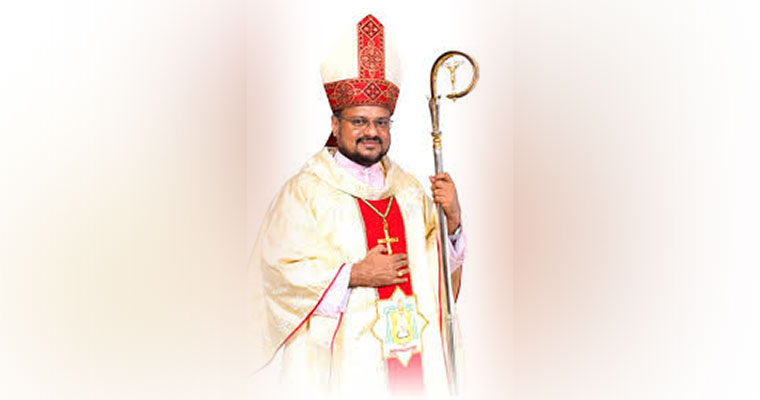 Kochi : Bishop Franco Mulakkal, who was questioned by Kerala police for the second day over rape charges by a nun, has been temporarily relieved of his pastoral responsibilities by Pope Francis, the Catholic Bishop Conference of India (CBCI) said Thursday.

The decision was welcomed by the group of nuns staging a protest here for the past 13 days seeking justice for their fellow nun. They said it was their ‘first victory’ in the tsruggle against the Bishop.

The Pope appointed Bishop Emeritus of the Archdiocese of Bombay Agnelo Rufino Gracias as the Apostolic adminitsrator of the diocese of Jalandhar with immediate effect, a CBCI statement said.

The announcement came even as the senior Catholic priest is being questioned by the Special Investigation Team for the second day here Thursday.

The Pope took the decision in response to Mulakkal’s September 16 letter offering to ‘step aside temporarily’ as the Bishop of the Jalandhar diocese, Kerala Catholic Bishops Council Spokesman Fr Varghese Vallikkattu told PTI.

He wrote the letter after Kerala police summoned him to appear before it for questioning in the case.

According to the statement issued by CBCI president Cardinal Oswald Gracias, ‘The Holy Father has received the request of Bishop Franco Mulakkal to be temporarily relieved of his pastoral responsibilities in the diocese of Jalandhar.’

‘Having considered all circumstances the Holy Father has accepted this request of Bishop Mulakkal and has appointed Bishop Agnelo Rufino Gracias, Auxilary Bishop Emeritus of the Archdiocese of Bombay as Apostolic Adminitsrator of the diocese of Jalandhar… with immediate effect,’ it said.

‘Our prayers accompany Bishop Gracias as he takes on his responsibiltiy,’ the CBCI president said.

A Jalandhar diocese release had said the Bishop expressed his desire to step aside in the background of what it claimed was the Kerala High Court’s ‘opinion in favour of Bishop Franco which says, there is lack of adequate evidence for the Bishop’s arrest indicating his innocence.’

‘He decided on his own to make his request to Holy Father. He is confident that his request will be accepted by the Vatican,’ the diocese said.

The bishop had earlier handed over adminitsrative responsibiltiy of Jalandhar diocese to Msgr Mathew Kokkandam in his absence ahead of his Kerala visit.

The group of nuns staging a protest here along with various various Catholic reform organisations seeking Mulakkal’s arrest and justice for the nun, lauded the Pope’s decision.

‘We are very happy..the Vatican has finally heard our prayers. It is the first victory in our tsruggle against the Bishop,’ a nun said.

Bishop Mulakkal has been accused of repeated rape by the Kerala-based nun of Missionaries of Jesus Congregation of the Jalandhar diocese. He has denied the charges.