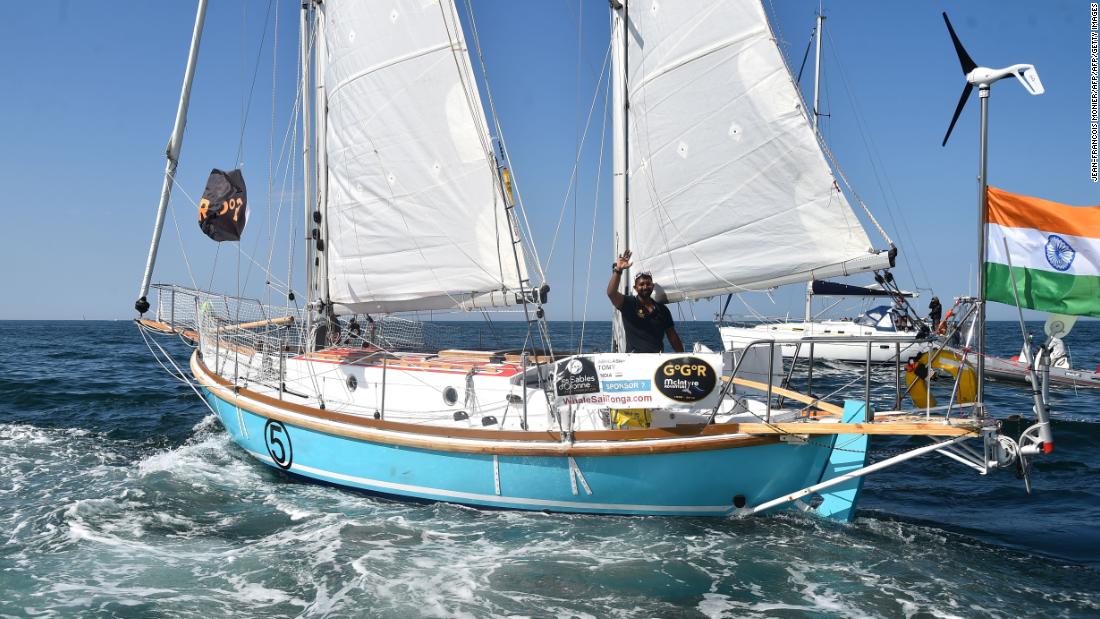 New Delhi: Athourities have informed that stranded and injured indian sailor Commander Abhilash Tommy was rescued and safely moved to a French Ship Osiris in Indian ocean today. The 39 year old indian solo sailor was seriously injured in the back when his yatch ‘Thuriya’ was damaged in a storm of Western Australia while participating a Golden Globe Sailing Race. Information from Indian Navy reveals that Abhilash is safe and and is presently under medical attention and is moved to Australian Naval Ship HMAS Ballart.

The Autsralian Maritime Saftey Authortiy, which  coordinated the rescue after Tomy’s 10-mtere vessel  was dismasted, said the yacht was about 3,500km west of Perth ‘in remote seas and in bad weather’.

The stricken vessel was spotted at the weekend by a number of planes that have been deployed to assist in the rescue effort, the authortiy confirmed.

Although attempts were made to reach Abhilash through small boats the nearly 8 meters tall wave pose serious threat for the rescuers and hence delays the operation. Latest satalite Text messages send by Abhilash reveals that presently he is in a condition where he cannot move as he is suffering from serious back injury. Reason that the yatch is stranded in the remote ocean, away form international ship routs, also delayed rescue operation. Options for rescue by airlifting is also narrow since airplanes or helicoptors with such facilities donot have the fuel efficiancy to reach so far and return.

‘Having initially communicated with race officials via his text message from hist racker, the yachtsman activated his ditsress beacon at midday Saturday AEST to help rescuers locate him,’ the authortiy said on Monday.

‘Amsa has tasked a French fisheries ptarol vessel, FPV Osiris to respond, which is expected to arrive on scene later today. Royal Autsralian Navy vessel HMAS Ballarat has also been tasked, but will take several days to reach the tsricken yacht.

‘Amsa has also tasked a Royal Autsralian Air Force P-8A Poseidon aircraft and a civilian Global Express aircraft from Autsralia. The Indian armed forces are supporting the search with an additional P-8 aircraft.’

HMAS Ballarat left Perth on Saturday night, joining the Adelaide-based P-8A Poseidon, which was deployed to France’s Réunion island to help with the search, the Autsralian Defence Force said.

‘These ADF assets are well suited to undertake maritime search-and-rescue missions during times of etxreme weather,’ it said.

Tomy became the first Indian to circumnavigate the globe in 2013, according to his website.